Nowhere To Hide For The “Enemy of the State”

Enemy of the State[1], a 1998 movie featuring Will Smith, Gene Hackman and Jon Voight[2], expounds the idea that an unsuspicious citizen has nowhere to hide when the Surveillance State turns its preying eyes on him.

Remember, this movie was filmed before 9/11, the Patriot Act, and the revelations of WikiLeaks and Edward Snowden…

“Since the 9/11 attacks, NSA’s role has grown even bigger, along with its license to listen in on Americans here and abroad.”

One has to wonder how Osama bin Laden allegedly managed to elude such a complex surveillance infrastructure for so long if they really were after him, but that’s by the bye.

Enemy of the State is in itself a captivating and action-packed spy-thriller supported by first-class actors, but its interest goes way beyond its theatrical qualities. It was in many ways a harbinger of things to come, as if a “hidden hand” somewhere in the film industry was trying to familiarize the audience with the future “new normal”.

In Enemy of the State, an unsuspecting man is being pursued by rogue elements of the United States’ National Security Agency (NSA) who use the full apparatus of this organization to catch him when, unbeknown to him, an old acquaintance drops an incriminating piece of evidence unto him. 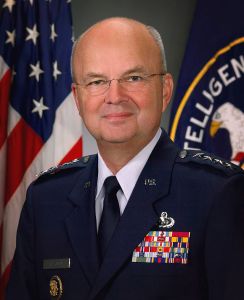 Interestingly, the NSA was concerned that this movie could tarnish the agency’s reputation. In a 2001 interview on CNN, then-NSA Director General Michael Hayden (who was promoted to head the agency around the time the movie came out) candidly stated that he “made the judgment that we couldn’t survive with the popular impression of this agency being formed by the last Will Smith movie”.[4]

In his 2006 book State of War: The Secret History of the C.I.A. and the Bush Administration, Pulitzer Prize-winning New York Times reporter James Risen[5] actually indicated that Hayden “was appalled” by the NSA’s portrayal. And according to an article published in Time magazine in June 2013[6], Hayden was in fact so worried that he responded with a full-fledged public relations campaign on behalf of the agency.

Here is an excerpt of what Hayden had to say at the time:

“It has to be somewhat a secretive agency, and right in the middle of a political culture that just trusts two things most of all: power and secrecy. That’s a challenge for us, and that’s why, frankly, we’re trying to explain what it is we do for America, how it is we follow the law. Could there be abuses? Of course. Would there be? I am looking you and the American people in the eye and saying: there are not.”

Case closed. Relax, keep calm and carry on – they’re looking out for us… 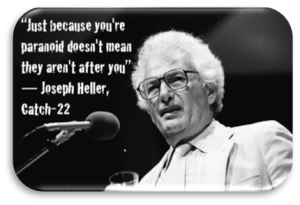 [1] Enemy of the State on Wikipedia, the free encyclopedia

[2] Uncanny coincidence: At one point in the movie, we see that the character played by Jon Voight was born on September 11…

[3] The Spy Factory: Examine the high-tech eavesdropping carried out by the National Security Agency. Aired February 03, 2009 on PBS – NOVA

[5] After Risen broke a story about massive NSA wiretapping in 2005, “Cheney had pressured the Bush Justice Department to investigate Risen’s activities but failed to secure an indictment.” The Obama administration eventually had the Justice Department subpoena Risen in 2010, but “Risen made clear that he would go to jail rather than divulge his sources”. The Untold History of the United States, Stone and Kuznick, 2012