I have seen a lot of unusual and heavy chem-trail activity over my area over the last few weeks (see Chem-trails in a cloudy sky, and Very unusual air activity), and there was some more yesterday, Saturday, October 10, as pictured in the photographs below.

I was recently pointing this out to a friend who has some contacts in the Canadian military, and he decided to do some further investigating.

One of his contacts, an ex-military speaking under cover of anonymity, mentioned that the US Air Force has been testing a new type of Stealth plane over Canada.

It seems they are trying to correct a problem with the planes’ engines leaving a distinguishable trail. And they would be conducting these tests in Canada where the public is less observant than the American public of what is happening in the sky.

Here are a few articles I found after a quick search:

This may or may not be part of what I have been observing lately. In any event, below are the latest pictures I took yesterday, October 10.  I took these pictures with my small Canon PowerShot A1400. Click on any picture to enlarge.

Notice the trail that neatly splits the cloud formation straight in the middle.

Taken in sequence, these three pictures show the Southern sky from East to West

This is something I have not seen before – a drastic high-altitude change of trajectory. North-South direction. 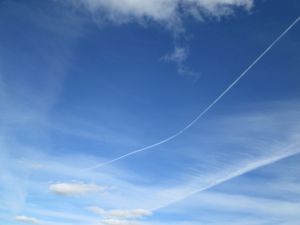 Notice how persistent these trails were and how widely they stretched. The large halo is obscuring the Sun. 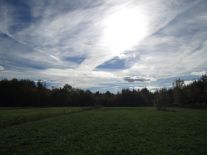 This was the view looking North.

Very impressive spreading trail, with another one coming from the South.