More rips keep appearing in the curtain of deceit the powers that be, those I prefer referring to as our BOSOs (“Benevolent” Occult Satanist Overlords), have raised up between us and the truth. The proverbial canaries in the coal mine are raising a raucous and you’d have to be deaf not to hear their warning cries.

The stock markets have been tumbling downwards since they opened on January 4th, making for the worst 10-day start to a year in history, while the price of oil has fallen below $30 US a barrel – some now predict if may fall as low as $10 a barrel. Meanwhile, it seems oil tankers have been waiting at sea instead of docking to unload their cargo at these ridiculous prices.

While the pundits have started acknowledging some of the obvious rips in the fabric of the official lies, other ominous indicators have not made it to our collective consciousness.

For instance, the Baltic Dry Index keeps tumbling and has fallen to record lows. This index measures the cost of shipping raw materials such as coal, iron ore or grain. It has fallen nearly 70% since August 2015, to reach its lowest level since its introduction in 1985.

Why does this index matter? Well, to put it simply, if raw materials are not moving, it means that down the line manufacturing of goods is headed for an equivalent slump. Worse than that, reports are also coming out that world-wide shipping may have crawled to an almost complete stop.

Curiously, the US Dollar has remained fairly strong, while other currencies tumble, the Canadian dollar for instance, which has fallen under 70 cents US over the last week. Most intriguing, though, is the fact that precious metals have not yet taken off – gold still has to rebound above $1100 US an ounce, while silver goes back and forth around the $14 an ounce barrier. 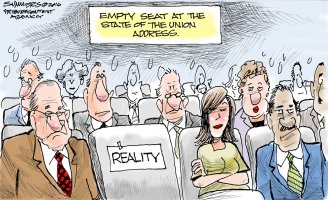 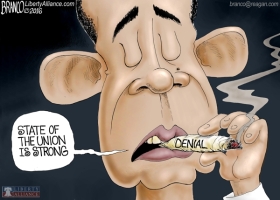 As the Royal Bank of Scotland was advising its clients to “sell everything,”  the Destroyer in Chief who occupies the White House delivered his last State of the Union, which should have been dubbed a “State of Delusion”, as Greg Hunter aptly said on USAWatchdog. Even Fox News admitted that the Destroyer’s speech was “disjointed, irrelevant and disappointing”.

Martin Armstrong was the only economist to provide a note of optimism (such as it may be…) amidst all the volatility that marked the beginning of this new year: while more and more analysts are warning that the economic collapse is set to engulf the world in 2016, Armstrong stated on The Caravan to Midnight that it won’t happen before 2017…

In any event, I tend to agree with David Icke, who declared on Infowars.com that the next 2 or 3 years will mark a turning point for the World as we have come to know it. Everything seems to be converging towards a collective transformation many have been heralding for quite some time now.

More than ever, you should heed Greg Hunter’s admonition and prepare yourself, physically, mentally, and above all else, spiritually. And remember, “fear not, God is in charge”.

Devotionals on Writings Received from the Celestial: A COURSE IN MIRACLES, A COURSE OF LOVE, THE WAY OF MASTERY, CHOOSE ONLY LOVE, and THE WAY OF THE MARYS . . .with Celia Hales