Everything you ever wanted to know about the 9/11 conspiracy theory in under 5 minutes. Originally published by The Corbett Report back on September 11, 2011.

Transcript (reproduced below) and sources: http://www.corbettreport.com/?p=2594

View other interesting videos about 9/11 posted on Starship Earth: The Big Picture: 9-11 Revisited—Dropping Some Bombshells.

Everything you ever wanted to know about the 9/11 conspiracy theory in under 5 minutes.

On the morning of September 11, 2001, 19 men armed with boxcutters directed by a man on dialysis in a cave fortress halfway around the world using a satellite phone and a laptop directed the most sophisticated penetration of the most heavily-defended airspace in the world, overpowering the passengers and the military combat-trained pilots on 4 commercial aircraft before flying those planes wildly off course for over an hour without being molested by a single fighter interceptor.

These 19 hijackers, devout religious fundamentalists who liked to drink alcohol, snort cocaine, and live with pink-haired strippers, managed to knock down 3 buildings with 2 planes in New York, while in Washington a pilot who couldn’t handle a single engine Cessna was able to fly a 757 in an 8,000 foot descending 270 degree corkscrew turn to come exactly level with the ground, hitting the Pentagon in the budget analyst office where DoD (Department of Defense) Staffers were working on the mystery of the 2.3 trillion dollars that Defence Secretary Donald Rumsfeld had announced “missing” from the Pentagon’s coffers in a press conference the day before, on September 10, 2001.

Luckily, the news anchors knew who did it within minutes, the pundits knew within hours, the Administration knew within the day, and the evidence literally fell into the FBI’s lap. But for some reason a bunch of crazy conspiracy theorists demanded an investigation into the greatest attack on American soil in history. 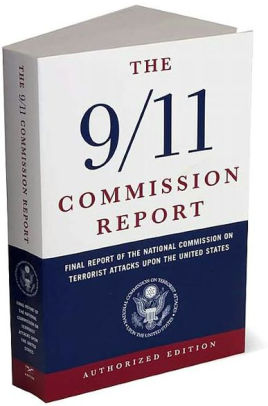 The investigation was delayed, underfunded, set up to fail, a conflict of interest and a cover up from start to finish. It was based on testimony extracted through torture, the records of which were destroyed. It failed to mention the existence of WTC7 (World Trade Center building 7), Able Danger, Ptech, Sibel Edmonds, OBL and the CIA, and the drills of hijacked aircraft being flown into buildings that were being simulated at the precise same time that those events were actually happening. It was lied to by the Pentagon, the CIA, the Bush Administration and as for Bush and Cheney… well, no one knows what they told it because they testified in secret, off the record, not under oath and behind closed doors. It didn’t bother to look at who funded the attacks because that question is of “little practical significance“. Still, the 9/11 Commission did brilliantly, answering all of the questions the public had (except most of the victims’ family members’ questions) and pinned blame on all the people responsible (although no one so much as lost their job), determining the attacks were “a failure of imagination” because “I don’t think anyone could envision flying airplanes into buildings ” except the Pentagon and FEMA and NORAD and the NRO (National Reconnaissance Office).

The DIA (Defense Intelligence Agency) destroyed 2.5 TB of data on Able Danger, but that’s OK because it probably wasn’t important.

The SEC (Securities and Exchange Commission) destroyed their records on the investigation into the insider trading before the attacks, but that’s OK because destroying the records of the largest investigation in SEC history is just part of routine record keeping.

NIST (National Institute of Standards and Technology) has classified the data that they used for their model of WTC7’s collapse, but that’s OK because knowing how they made their model of that collapse would “jeopardize public safety“.

The FBI has argued that all material related to their investigation of 9/11 should be kept secret from the public, but that’s OK because the FBI probably has nothing to hide.

This man never existed, nor is anything he had to say worthy of your attention, and if you say otherwise you are a paranoid conspiracy theorist and deserve to be shunned by all of humanity. Likewise him, him, him, and her. (and her and her and him).

Osama Bin Laden lived in a cave fortress in the hills of Afghanistan, but somehow got away. Then he was hiding out in Tora Bora but somehow got away. Then he lived in Abottabad for years, taunting the most comprehensive intelligence dragnet employing the most sophisticated technology in the history of the world for 10 years, releasing video after video with complete impunity (and getting younger and younger as he did so), before finally being found in a daring SEAL team raid which wasn’t recorded on video, in which he didn’t resist or use his wife as a human shield, and in which these crack special forces operatives panicked and killed this unarmed man, supposedly the best source of intelligence about those dastardly terrorists on the planet. Then they dumped his body in the ocean before telling anyone about it. Then a couple dozen of that team’s members died in a helicopter crash in Afghanistan.

This is the story of 9/11, brought to you by the media which told you the hard truths about JFK and incubator babies and mobile production facilities and the rescue of Jessica Lynch.

If you have any questions about this story… you are a batshit, paranoid, tinfoil, dog-abusing baby-hater and will be reviled by everyone. If you love your country and/or freedom, happiness, rainbows, rock and roll, puppy dogs, apple pie and your grandma, you will never ever express doubts about any part of this story to anyone. Ever.

This has been a public service announcement by: the Friends of the FBI, CIA, NSA, DIA, SEC, MSM, White House, NIST, and the 9/11 Commission. Because Ignorance is Strength. ■

This entry was posted in Other Food for Thought, Our Occulted History and tagged 11 septembre, 2001, 9 /11 A Conspiracy Theory, 9/11, 9/11 Commission, ben laden, Corbett Report, September 11, version officielle, video. Bookmark the permalink.

Today's energies from the Planet...

"Take Action Against The Illuminati, Stand As The People" - Yoandy L.

Prepare for Change
My Waking Path

Things I learned and remembered along the way